Official Investigations & Security Services, Inc. was contacted by E Welch of Covingon, KY to locate her birthfather and/or any surving children or relatives. Mrs. Welch, age 82, was recently provided with her birth certificate by the State of Michigan.

The birth certificate listed the father as Russell A Fuller, age 20, of Ligonier, Indiana. He was an electrician. A search of birth records of Noble County, Indiana showed two Fuller's born in 1905. The first was R. Andrew Fuller and the second as "Baby male" Fuller. I did a search of the social security death index and discovered a Russell A Fuller born on one of the dates in the birth index. He was listed as deceased on December 24, 1989, in Lee County, Florida.

I requested a copy of Mr. Fuller's death certificate. On it, it listed Mr. Fuller as an electrician. Also listed was a surviving spouse, Grace, and an address in North Fort Myers, Florida. A search for Grace showed that she passed away in 1991. I also conducted a reverse search on the address provided.

I got a hit on the address search. I located a Phillip Fuller, who had resided at the address. A further search indicated that Mr. Fuller now resided in Danville, VA. Directory assistance listed a published telephone number for Mr. Fuller. On Monday, January 26, 2009, I made telephone contact with Mr. Fuller, a retired US Airways pilot.

When I gave that name to Mr. Fuller, his wife screamed and started crying in the background. Mr. Fuller informed me that his father, Russell, had kept all of the love letters, books, and the Bible all signed by "Alice." They never could figure out who Alice was - mystery solved.

After an hour-long conversation with Mr. Fuller, I called Mrs. Welch and informed her that her half-brother would be calling her within 20 minutes. They spoke for 3 hours on Monday and have planned a reunion in the near future. The date and location will be determined soon.

An update with photographs will be posted at that time.
at January 29, 2009 No comments: 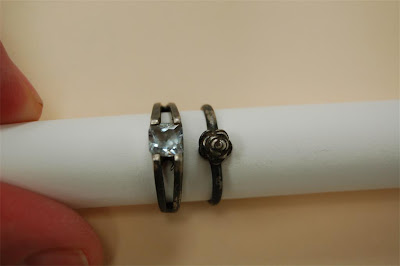 The Hamilton County Sheriff's Office has been trying to identify the skeletal remains of a female found Monday in Glendale.

They have released photographs of two rings that were found in the vicinity of the female's remains.

The remains were found on Monday evening in a wooded area in the 600 block of East Sharon Road. Two people found the skeletal remains when they were looking for aluminum cans, and called police. Police say the age of the woman remains unknown.